Galabovo Municipality and Hristo Kovachki’s Brickel Company have prepared an agreement, which is to arrange the signing of a contract between them for burning of waste in the businessman’s thermal power plant.

The decision was taken at an extraordinary meeting of the Municipal Council in Galabovo, held on June 6th this year, learned “Pro Veritas”.

At the same time, according to the opinion of the Regional Inspectorate of Environment and Water (RIEW) in Stara Zagora, Brickel TPP may start burning waste

without an Environmental Impact Assessment

(EIA), that is, without analyzing how this activity will affect humans and nature.

“Greenpeace – Bulgaria” fears that changing fuel in one of the country’s oldest, from technical and moral point, coal plants could lead to even greater environmental problems than those caused even now by Brickel as a major pollutant in Galabovo.

first place in the sad ranking

of the cities with the most polluted air in Bulgaria. And recently the European Commission opened a new criminal case against Bulgaria at the Court of Justice of the European Union in Luxembourg. This time it is for the permanent exceedance of the sulfur dioxide standards in Southeastern Bulgaria, where the four TPPs using the Eastern Maritsa coal with high sulfur content are located – over 90 percent.

However, the problem of sulfur dioxide is only one of the many that are created by the activity of thermal power plants in the Maritza East complex, three of which have invested in new and highly efficient desulphurization installations. But even they no longer meet the latest rules of European environmental law. A major problem for the population of Galabovo is the high dust content in the air, the source of which is Brickel.

The saga of extending the lifetime of the power units in the power plant of the energy boss is long, and the trade-offs over the years by state institutions are obvious. And always with the argument that if the TPP and Brickel are closed, there will be about 1,000 people from the municipality left on the streets, that are working there at the moment. Hundreds of other related jobs will also be affected.

To all outstanding air quality problems created by Brickell’s operation, the following was recently added –

the investment intention to incinerate waste

of all kinds of origin.

The agreement, adopted by the Galabovo Municipal Council on 6 pages, describes the obligations of both parties in their future contractual relations (see the full text of the agreement in the attachment below). One of the first objectives is the provision by the Municipality, for incineration in Brickel, of mixtures obtained after mechanical treatment of wastes and modified combustible wastes or the so-called RDF.

Proposal for Agreement between Galabovo Municipality and Brickel TPP“

The long-term goal of the partnership is to improve the air quality in the region. The municipal councilors also see an option for utilization of household waste from the municipality and saving of funds for its transportation to the Regional depot near the village of Rakitnitsa, Stara Zagora region.

The contract will be signed within one week of receipt of the necessary administrative documents, including the new Brickel Complex Permit, which according to page 2 of the agreement must be issued in October this year, i.e. in less than two months. It should regulate the utilization of

not less than 500 thousand tons of waste per year

with code R1 (used primarily as a fuel or other means for energy production) according to the Transitional and Final Provisions of the Waste Management Act. The agreement also states that after the treatment of 100,000 tonnes of waste for one year after signing the contract, both parties will negotiate for new quantities and their amount, prices and terms of delivery will be further specified.

An important detail is that the Municipality of Galabovo commits itself to assist with the expert assistance in changing and updating the Complex Permit of the company of Hristo Kovachki. The agreement also includes the obligation with the funds from the first 100 thousand tons of waste which the municipality will receive as importer of garbage from Italy, to purchase a separation and composting installation, as well as technique for crushing of waste with size up to 30 cm.

Even more interesting are the obligations of the municipality, included in the other 4 items of the agreement. According to them

the municipality has no right to make public

the facts and circumstances of company’s proprietory character and to disclose data, conversations and correspondence between the parties related to the performance of the contract. This clause sounds strange given the fact that waste incineration is a matter of high public interest as it is directly related to air cleanliness.

The final clauses of the agreement explicitly state that it will be terminated if Brickel does not receive by December 2019 the Complex Permit to burn 500,000 tonnes of waste per year.

Before “Pro Veritas”, the Mayor of Galabovo Nikolay Tonev, who is likely to fight for another term, did not hide the intention of the municipality to join the

He recently traveled to Milano, Italy to learn expertise from the operation of a modern waste incineration plant. According to Tonev, the plant there is located 30 km from the city, burning 380 thousand tons of garbage per year and producing 34 MGh of electricity.

For this reason, the Mayor of Galabovo plans to withdraw a bank loan to invest in waste separation and the construction of RDF processing plant. And the resulting raw material, far cleaner than the coal in the East Maritza Basin, can be offered for incineration not only to Brickel but also to the management of other plants, including to the headquarters of the American company AES, which is located in the territory of Municipality of Galabovo.

In the future, Nikolay Tonev intends to conclude a contract for

imports of hundreds of thousands of tons of garbage from Italy,

so that, in his words, the municipality of Galabovo could profit from this business, which would already be developing on its territory.

According to the Mayor, it is most likely that in Brickel experimental burning of waste, accumulated at a special site near the plant, was done already.

Despite the preliminary agreement for an interview after the end of his summer vacation, the company’s CEO Yani Pavlov did not answer his mobile phone. The conversation with him should have made it clear whether or not the Brickel waste was currently being burned. The people from the company’s telephone exchange, however, said they were forbidden to connect anyone with the director. And the local people talk with fear that it is possible to enter the company only with police or a prosecutor.

who should respond to the public interest in the topic and provide guarantees for the safety of an obsolete plant when it changes its fuel, as well as for the cleanliness of the environment and the health of residents in the region.

A silent refusal of information was the reaction of RIEW-Stara Zagora, as well, to our questions about whether Hristo Kovachki’s company is already burning waste, whether it will receive a new complex permit and whether Brickel has been sanctioned for the latest air pollution since the beginning of the summer.

For more than two weeks, the spokeswoman of the environmental inspection could not be found on her mobile phone. This style of work is inherent to the Regional Environmental and Water Inspectorate, which controls the activity of the largest energy complex in Bulgaria and of the energy production from coal that is most environmental polluting in Bulgaria.

At the end of 2018, the Stara Zagora Regional Inspectorate of Environment and Water did not approve the plan for changing the combustion installation in Brickel and replacing some of the coal with waste. However, probably the Inspectorate changed at later stage that

decision and is stubbornly hiding it from society.

Here is the time to recall that the Sofia City Administrative Court sentenced the MoEW for refusing to provide to the Association “For the Earth – Access to Justice” the letter authorizing TPP Bobov Dol to trial waste incineration for a term of 6 months. The magistrates rejected the ministry’s argument that the information requested comprised “production and commercial secret” and ruled that citizens have the right to know what and how much waste was being burned at the plant.

The Lord of Wastes, as Capital recently called Hristo Kovachki, is already using (or is planning to use) RDF and biomass in its plants. There is nothing wrong with that if all legal procedures are followed. Such as having an EIA when it is planned to burn more than 100 tonnes per day and over 500 thousand tonnes of waste annually at Brickel, says Meglena Antonova of “Greenpeace – Bulgaria”. The organization has an exclusive Report on the largest sources of sulfur dioxide pollution in the world. This report will be officially presented to the media on 19 August. At this stage, it can only be said that according to the findings reflected in it, Bulgaria ranks in the

list of the 20 most polluting countries in the world.

Serbia and Ukraine are the other two European countries in the ranking.

Hristo Kovachki’s Brickel is one of the dirtiest coal plants in Europe that should have been closed long ago. And the population in Galabovo – the region with the most complicated environmental situation in the country – is at constant risk of high mortality diseases. In this context, the intention to burn hundreds of thousands of tonnes of waste per year imported from Europe without broad public discussion and without clarity on the technology to be used is alarming. The silence of the owner of the company and of the control bodies such as the Minister of Environment and Water and in particular of the Regional Inspectorate of Environment and Water – Stara Zagora are criminal. 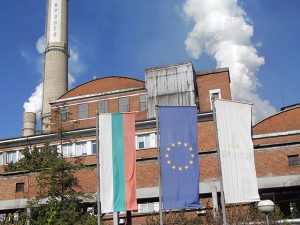 Brickel TPP will burn waste under contract with secret clauses