Signals for fake hospitalizations in the capital’s “Lozenets” Hospital along clinical path 20.1 “Interventional treatment and related diagnostic catheterizations for cardiovascular diseases for persons over 18 years of age”, for which the National Health Insurance Fund (NHIF) paid BGN 3,318 until August 2020, and then BGN 3,671, became the subject of a journalistic investigation and put the topic on the agenda of the media.

The received nearly BGN 200,000 for 60 people who were not treated in the hospital were justified by the management of NHIF as a technical omission of an employee of the medical institution. Such an answer was received by “Pro Veritas” after an application was submitted under the Access to Public Information Act.

The answer says also that in the documentation of the health insured persons, who claim that they were not treated in the hospital on this path, their signatures appear. And after a survey conducted with the patients, the documentation was submitted for inspection by the competent authorities.

Another inspection at “Lozenets” Hospital found 38 fake hospitalizations more for BGN 138,000, which, according to journalist Mirolyuba Benatova who investigated the case and submitted the signals to the NHIF, have not yet been returned to the fund.

With the application we requested information about the funds paid under the clinical path in question to all hospitals in the country for 2020. It turned out that 7313 patients have passed through this clinical path. A reference of the NHIF, requested by the Bulgarian Institute for Legal Initiatives (BILI) under the APIA, shows that the reported and paid cases under clinical path 20.1 for 2019 are 3686. What did the comparison between the two years show?

In 2020, the cases of patients who passed through the clinical path in question is almost twice as high as in 2019 – the last pre-epidemic year.

At the same time, the statistics of the health authorities in our country shows a sharp decrease in the total number of hospitalizations in Bulgaria in 2020, due to the declared pandemic and the fears of people to seek specialized hospital care. In practice, from the entire base for active treatment in our country, which is over 45 thousand beds, no more than one third were occupied during the year. So how does the number of patients who have passed under one of the expensive clinical pathways has doubled? Is it possible that the reason for this is thrombosis as a consequence in patients treated for Covid or it is the most banal draining of the fund? The answer to this question is due to the public by the management of the NHIF, which must publicly announce the results of the inspection, if such has already been carried out. If it was conducted only in hospitals for which there were signals of false hospitalizations such as “Lozenets” in the capital, then an inspection should be ordered in all medical institutions in the country that have contracts under clinical path 20.1.

Because the National Health Insurance Fund has paid only for this path funds in the amount of between BGN 24 and 26 million in 2020.

In 2020, the government allocated a huge additional resource from the budget and European programs to deal with the crisis caused by the pandemic. At the end of May, the Analysis “Transparency and Effectiveness of Public Funds for Dealing with Covid-19. Corruption risks and measures in the fight against the pandemic” of the BILI was presented before the media. The examples given in the analysis and the conclusions made are the result of a study of a huge amount of information received from various institutions and agencies mainly for the period 13.03.2020 – 31.01.2021. For this reason, the health authorities in our country can be assisted in the ongoing investigations of misuse of public funds during the Covid-19 pandemic, not only in hospital care, but in the entire health care system.

One of the references of the NHIF prepared at the request of BILI, presents a complete list of all reported and paid clinical pathways in hospitals across the country for 2019.

The analyses of the huge amount of information

puts a number of questions and raises doubts about paid activities on clinical pathways that have not actually been performed, i.e. fake hospitalizations are reported.

Here are some specific examples:

According to the reference of NHIF, the number of births reported and paid to hospitals in 2019 is 47,633, and according to national statistics the total number of newborns is 61,538. This practically means that 13,900 of the babies born this year are most probably children of uninsured mothers, such as 40 percent of women in the Roma community are, of other mothers who chose to give birth at home and without medical care or in private clinics.

In the Municipal Multidisciplinary hospital for active treatment (MHAT) in Svilengrad in 2019, 83 cases of births were reported (clinical path 005) and a thousand of “Inpatient care of high-risk pregnancies” (clinical path 001). At a price of BGN 400, determined in the National Framework Agreement for clinical path 001, the hospital has received from the fund the total amount of BGN 400 thousand. More importantly, these 1,000 hospitalizations cannot be real.

Otherwise, it turns out that each of these women must have been hospitalized many times during her pregnancy, and this, beyond any comment, is impossible for all mothers!

This example also raises the issue of prevention of pregnant women, who according to these statistics were at high risk.

A comparison with other hospitals with similar volumes of activity, such as the municipal hospital in Chirpan, for example, shows that during the year there were 77 births and 329 hospitalizations on the clinical path for inpatient care of high-risk pregnancies. In Harmanli, with 43 births for the whole year, the reported and paid cases on clinical path 001 are 268. However, for the same period the largest hospital in Southern Bulgaria – Plovdiv University Hospital “St. Georgi” has 1390 births and 540 hospitalizations on clinical path 001, and in the Stara Zagora University Hospital “Pr. Stoyan Kirkovich” the births are 967 against 290 reported cases of clinical path 001. Statistics bring out the paradoxes in the reports that need no comment.

Questions are raised by reported and paid by the NHIF hospitalizations on clinical path 048 “Diagnosis and treatment of bronchopneumonia in childhood.”

In 2019, there are 1,000 of them in the Svilengrad Hospital. This number “stings” the eyes, because there are hardly so many children in the four municipalities that the hospital serves – namely Ivaylograd, Topolovgrad, Lyubimets and Svilengrad.

Which means that every second child from these municipalities must be treated in the hospital with this diagnosis several times a year.

More cases of hospitalizations of children with bronchopneumonia have been registered in MHAT Pazardzhik – 1367 and 1070 in MHAT “Hygia” in the same city, as well as in the hospital in Peshtera, where the cases are 1454. In all other large state and municipal hospitals in the country, even in specialized hospitals, there are not so many hospitalizations in this clinical path (private ones do not have contracts with the NHIF for treatment of socially significant diseases such as bronchitis, bronchopneumonia, COPD and asthma).

The aim of these excessive hospitalizations, according to doctors from Territorial expert medical (TEMC) commissions, is the subsequent disability of children from the Roma community. According to a survey by the Open Society Institute, more than 30% of Roma households have at least one person with a serious or chronic illness or a certain degree of disability, and every sixth Roma household receives a disability pension. And in the National Strategy of the state for Roma integration (2012-2020) it is stated that 12.6 percent of the Roma in Bulgaria have a degree of disability.

The non-professional examination of the reference reveals another 1060 reported cases of stroke without thrombolysis on clinical path 50 in Varna University Hospital “St. Marina”,

Under the expensive clinical path 026 for diagnosis and treatment of unstable form of angina pectoris with interventional treatment at a price of BGN 3,430, the Sliven MHAT “Hadji Dimitar” has reported activity for nearly BGN 2 million, the MHAT “Deva Maria” in Burgas for BGN 1,170 million and MHAT “Burgasmed” Hospital for BGN 1.440 million.

The specialized hospital for treatment of cardiac surgery in Burgas “Acibadem City Clinic”, deleted as a trader on October 3, 2019, reported

for 9 months 161 hospitalizations on path 028 for diagnosis and treatment of acute coronary syndrome with a price of 4540 BGN.

Pleven Private Hospital “Heart and Brain” has reported 120 hospitalizations under path 119 – “Surgical procedures for complex heart malformations with very large volume and complexity in conditions of extracorporeal circulation” with a price of BGN 13,500, for which it received from the NHIF the amount of BGN 1.620 million. The medical institution has performed and reported activity for 77 cases of unstable form of “angina pectoris with invasive examination” at a total value of BGN 1.814 million.

In just one publication there is no way to analyze the results of the reported activities in the large Sofia public and private hospitals such as Military Medical Academy (MМА), “Alexandrovska”, “Pirogov”, where an inspection of the Health Insurance Institute is going-on at this moment, and “Acibadem City Clinic” MHAT ”Tokuda” Hospital, etc. that are currently inspected. Most probably some of the cases presented here are not fake hospitalizations but report actual activity performed and are paid for it by the fund.

But if an inspection proves the opposite, the question follows how effective is the control of NHIF, which must take care of the funds of Bulgarian health insured citizens.

These citizens now have easy access to their health record and can see what activities are reported on it. In mine, for example, “Lyme disease” was reported and I never ever was diagnosed or treated with that diagnosis. Therefore, the next regularly elected government should continue the inspections started by the official Minister of Health and the NHIF. Otherwise, even if the Law on Medical Establishments is changed, the money from our health insurance will continue to be drained under various schemes. 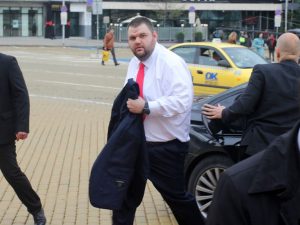 The Military Medical Academy hid the documents for the donations…